CHARLESTON: 72 HOURS- Photography by Ara Hagopian is a twenty-piece exhibit covering areas in proximity to the popular South Carolina resort. The work was captured with the Sony A7R full-frame camera and 55 mm Carl Zeiss lens, during the days and nights of June 24, 25, and 26, 2014. 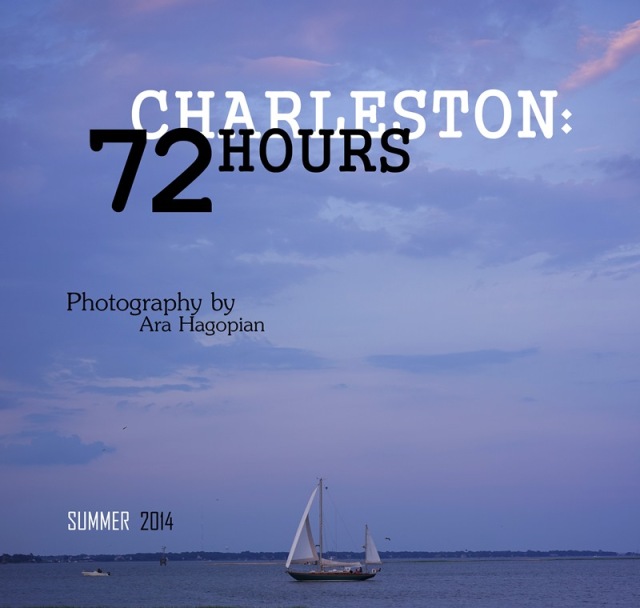 When I debuted a similar three-day theme last year with NEW YORK: 72 HOURS, I noted that my coverage of New York City was not designed to be a highlight tour of the best, or most famous, of the city’s sights. As such, this Charleston exhibit is not a collection of what a visitor must see if they’re staying in the city.

Instead, what viewers get with the 72 HOURS series is this artist’s impression of what was beautiful or interesting during a continuous three-day stay on site. To be free to wander the city with a camera—and without a checklist—is the heart of 72 HOURS.

Charleston was a city of helpful, engaged people—both visitors and workers. Each photograph in this set is paired with a description that provides a continuation of the illustrated view.

Stay till the end to read my detailed artist’s notes. Enjoy the show!

BELOW: The Ladies of Rainbow Row.

The Blushing Bride. On East Bay Street between Tradd and Elliot stands a baker’s dozen of beautiful dwellings. Each is painted in a clean, pale shade, exuding a royal personality to those who care to stop and look. The buildings’ collective history dates back to the mid-1700’s when the bases of the buildings housed shops, and the shopkeepers lived in the rooms above. For the photograph, my impression was that of a blushing bride.

BELOW: The Ladies of Rainbow Row part II.

The Perfect Survivors. Charleston suffered heavy bombardment during the Civil War and also a catastrophic earthquake in 1886. I overheard a Charlestonian say “stucco covers all the sins,” and yet all I saw was perfection, makeup and all. 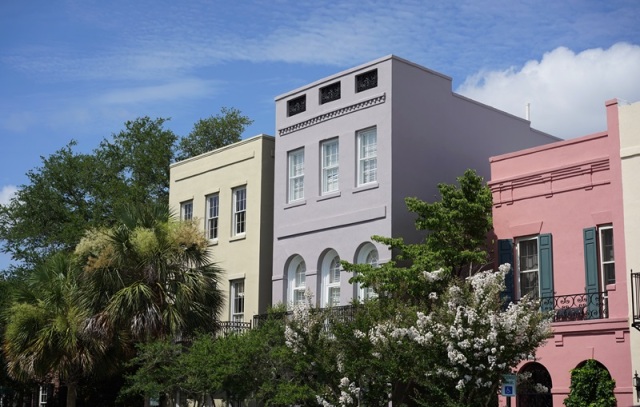 BELOW: Fountain at Calhoun Mansion.

The private garden’s fountain had a luminosity at its base, brought out by the movement of the water. Watch her shake off the tropical heat! 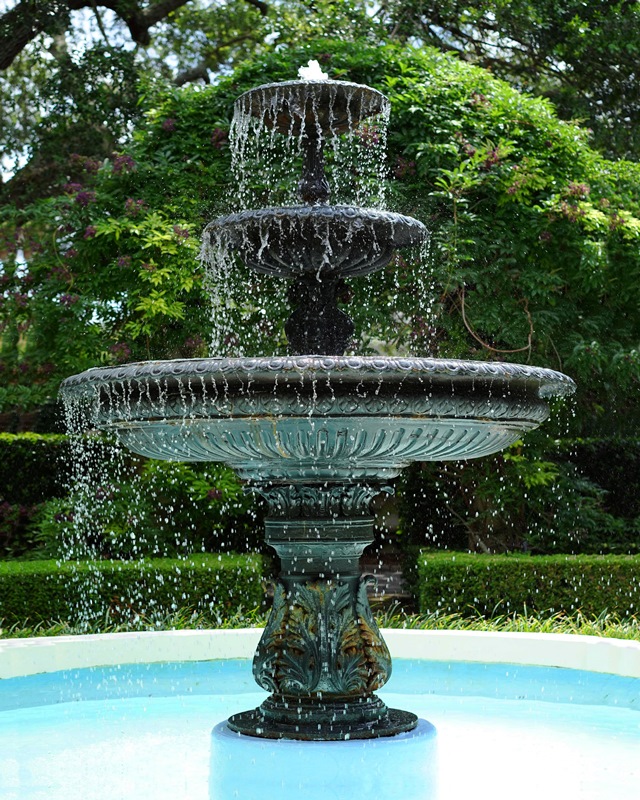 BELOW:  The Fountains of Waterfront Park. 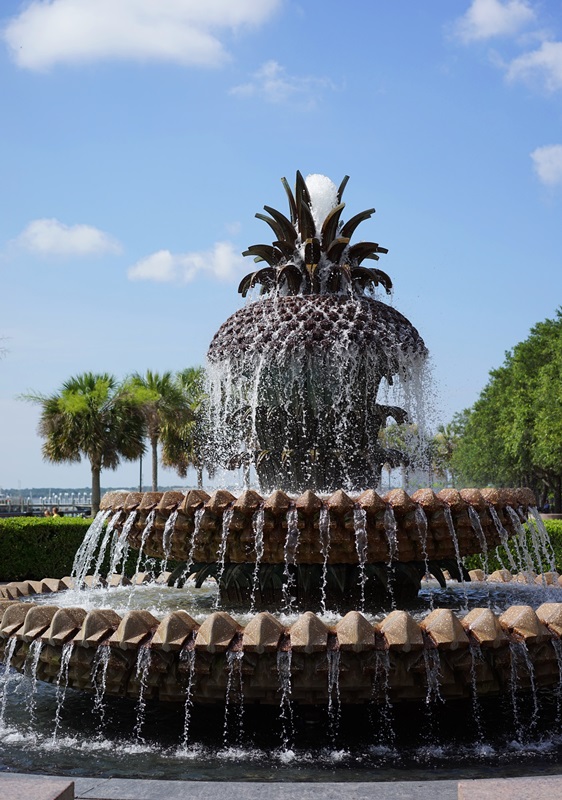 BELOW:  The Fountains of Waterfront Park part II.

Free-Flowing Fountain. In contrast to Pineapple, the free-flowing fountain at the park doesn’t adorn; she entertains. People of all persuasions come to frolic in the sizeable spray, or to simply stand with their feet in the generous water pool. The free-flowing fountain is one of the places on Earth where everyone has a good day. 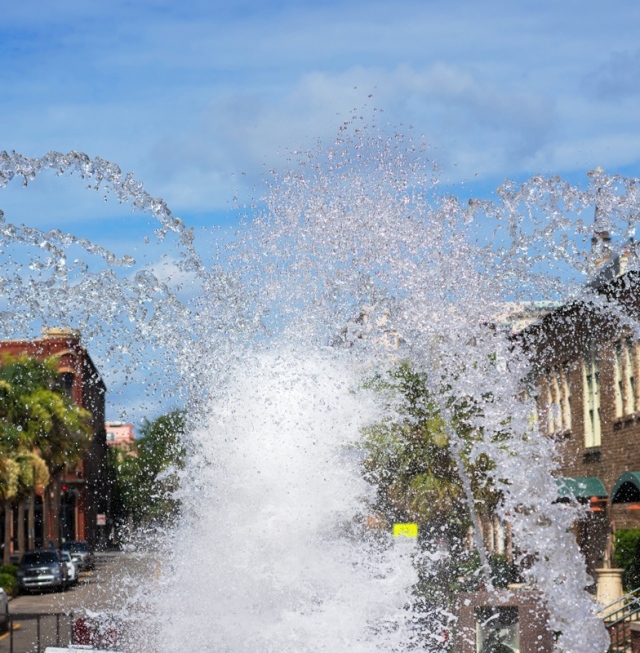 Elegant Tree. As the Charleston day ends, people come to the water’s edge to dream, or to resolve, or to simply look at the egrets, pelicans and dolphins in the Cooper River. On the grass stands the Palmetto tree, where each frond is a shapely finger and each visitor’s wish is an offering of a diamond ring. 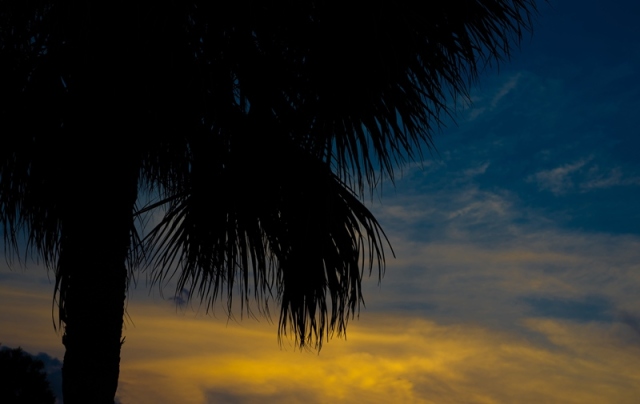 BELOW: At Sullivan’s Beach.

There will come a moment when one may observe an active spot of life on the ground and in the sky. When you’ve reached such a position—and you’ve recognized your place between these extremes—you must either gently connect with the creatures or stand out of the way. Here the camera is situated comfortably in-between the hermit crab and pelican. 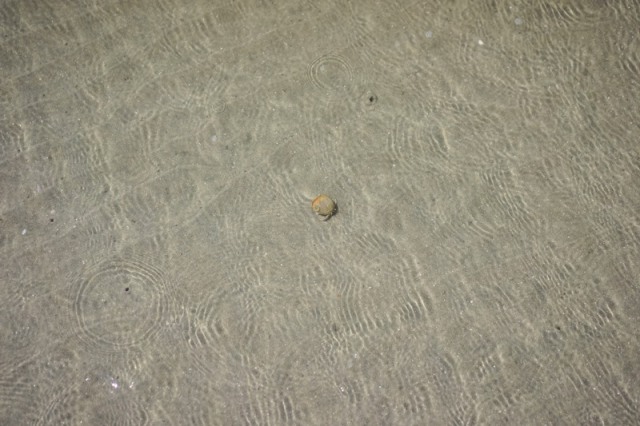 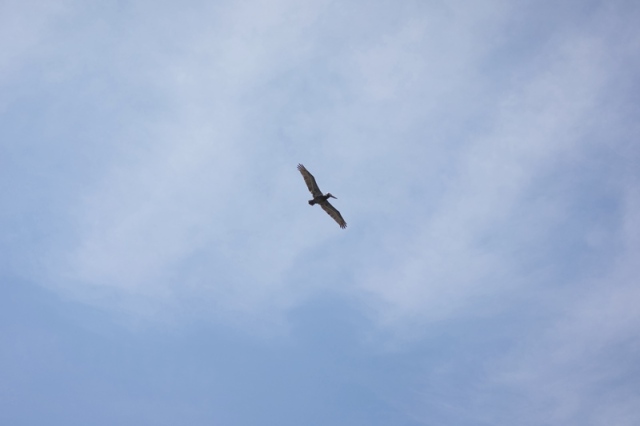 Feral Cat is Aware. This half-eared feral cat wandered the seedy backstreets, wary of anyone who approached. The photograph is not black and white but strikes that way, the starkness built into the morning and the mood. The cat is about to cross the line literally and proverbially: Where’s her next meal coming from? 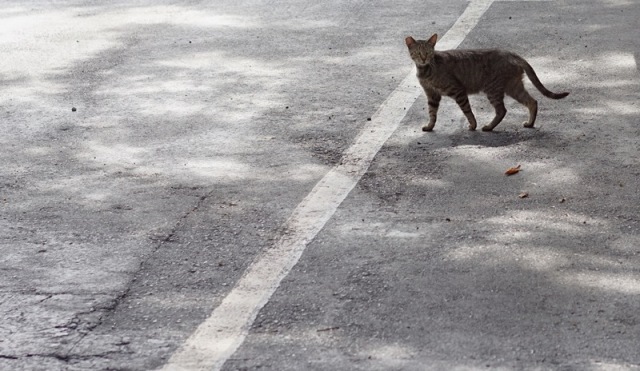 Milo Relaxes. Milo is Charleston’s most famous cat. A gentle old soul of 19 years, he greets all visitors with pleasant appreciation. He’s the star of a popular book. While the feral cat skulks, Milo sits; the feral has a parking lot, Milo has a parquet floor. This is life.

Milo passed away nine days after our visit. He was a kind soul, who brought smiles to thousands of strangers. 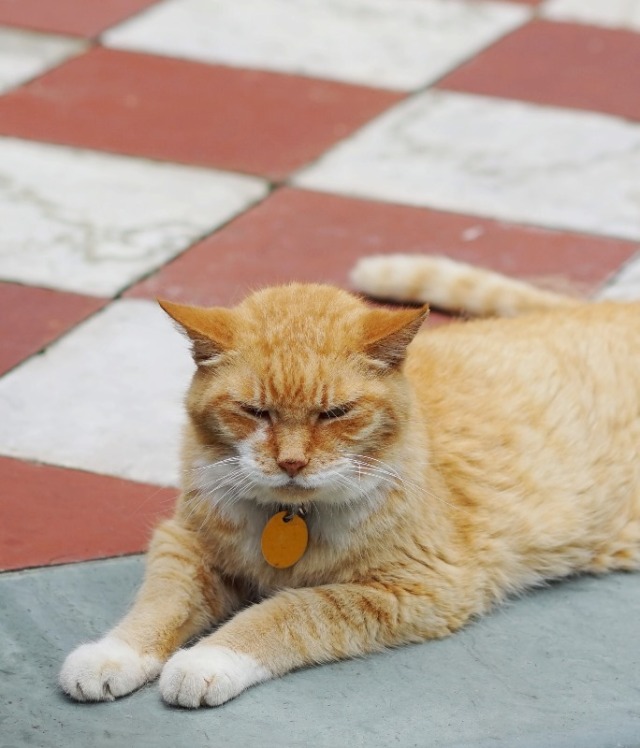 Luxury. Luxury is a custom iron gate to keep strangers out of your porch and garden. 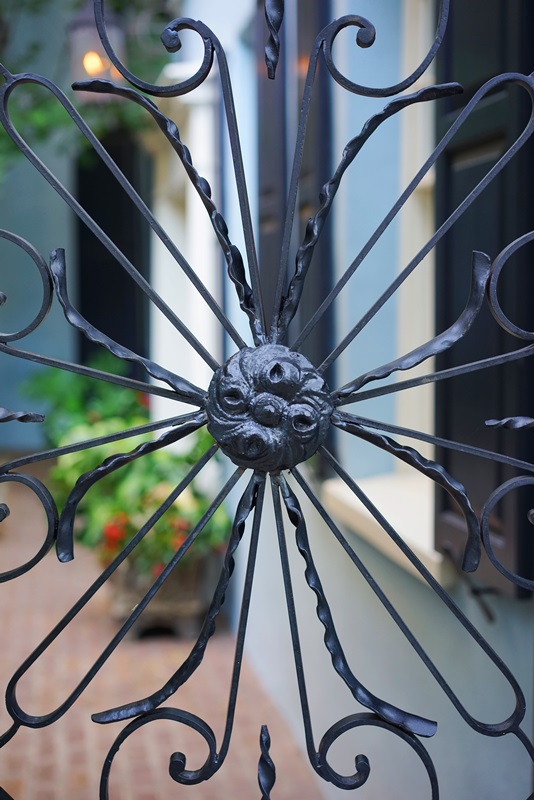 BELOW: The Dwellings part II.

Anti-Luxury. The Magnolia Cabins date to 1850 where each structure held two slave families, with up to six people per room. The slaves were freed in 1865, at the end of the Civil War. The Plantation family has carefully preserved the cabins, with information placards and a detailed timeline of those who continued to live, and labor here. Being free did not necessarily mean free to follow one’s will or whim. 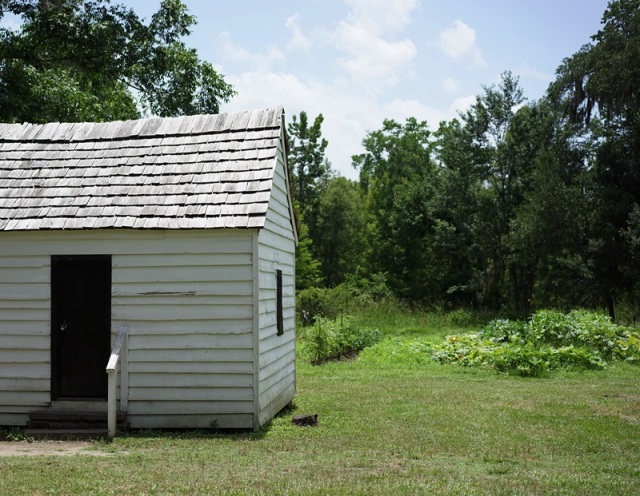 Is there a sight more symbolic of a man enjoying some time off than a fishing rod facing the surf, with an uncrowded beach and a clear sky all around? What delicacies do the warm waters hold? The fisherman’s mind and body relax in the refreshing breeze—these moments will stay with him long after the day is over. The fishing rod photograph celebrates a man at leisure. 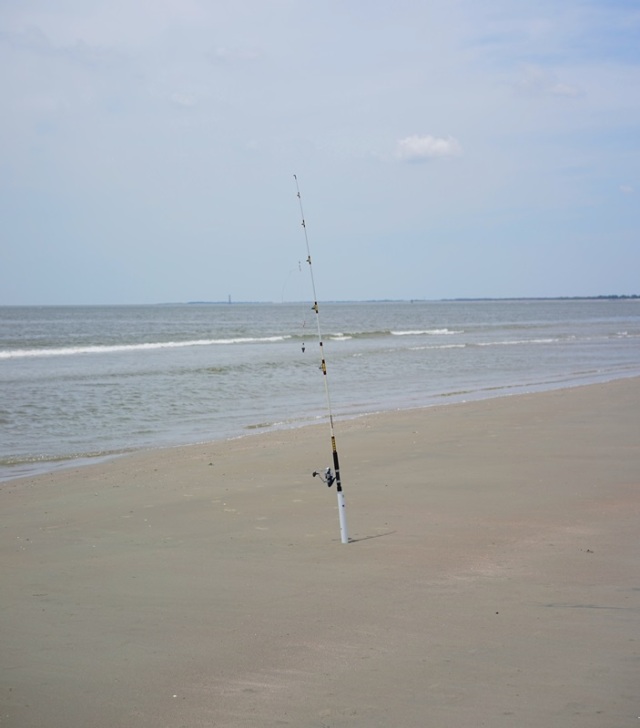 BELOW: The Old Gun Powder Magazine.

The Gun Powder Magazine is the oldest surviving building in Charleston. It was built circa 1710, is a survivor of the 1886 earthquake, and is complete with vintage wood stocks. The Cumberland Street building was partially restored in the 1990’s. Light and empty space vs. stocks and shadow. Once again, Charleston illustrates a dichotomy.

BELOW: The Great Southern Trees.

Grand and Twisting. This exhibit’s first Great Southern Tree stands at White Point Gardens, at the Battery that was dedicated by the Daughters of the Confederacy in 1899. This grand lady is vine and leaf-covered, hundreds of years old and in a very public place. What glory has she seen? What storms have been endured? Promises made in her shadows? 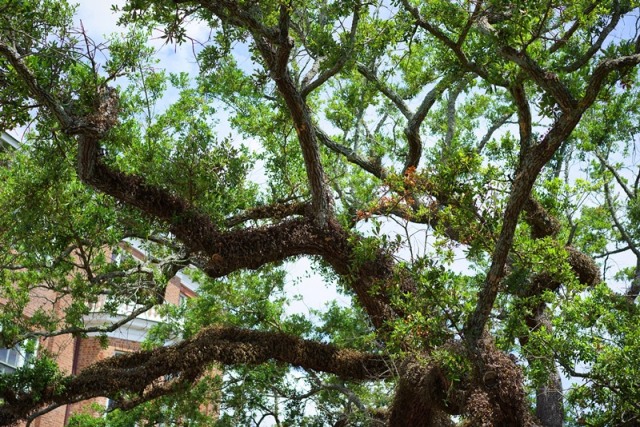 Tall and Elegant. This second Great Southern Tree stands on private property, in a pond that’s nearly touching the historic Ashley River. Spanish Moss only adds to her character. 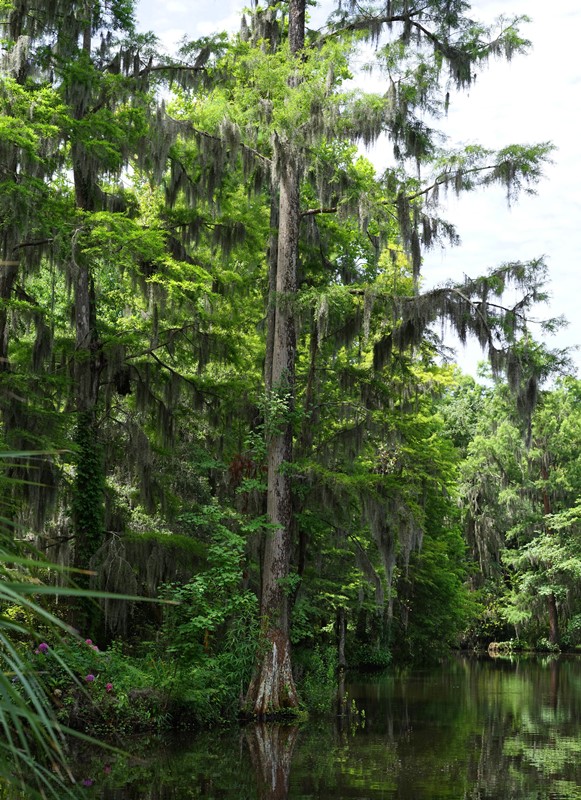 BELOW: The Huguenot Church.

The Huguenot Church at Church and Queen Streets was damaged by Civil War shelling and the 1886 earthquake. She’s been rebuilt and reaches splendidly to the sky. Morning light; still taking parishioners; and the prettiest blush in the city. 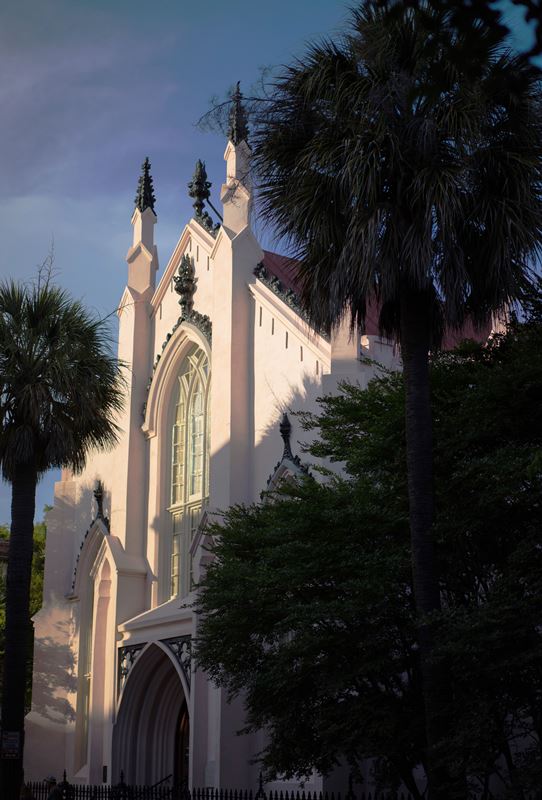 Horses are a constant on the streets of Charleston. The walls, trees and flowers were pretty enough for me to meter the camera for an overcast day shot and set the frame; the arrival of the horse was a fortunate happenstance. 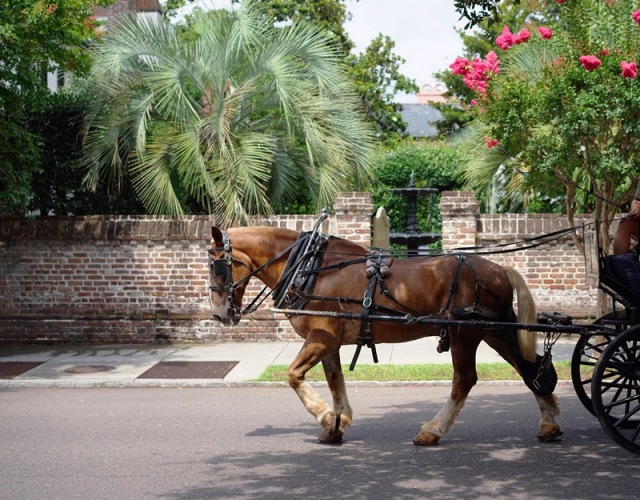 BELOW: Shipping out, shipping in.

Large cargo ships head out the Cooper River, at about 7 PM each night. The red beast passes Patriot’s Point and dwarfs the largest warships.

BELOW: Pleasure craft shares the same waters, but with a different direction and intention. An after-dinner gelato and a sight like this makes for a perfect evening. 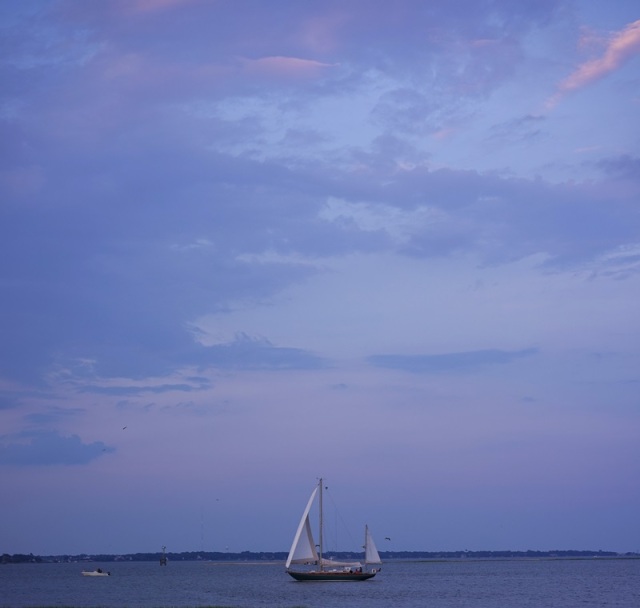 PHOTOGRAPHER’S NOTES: Choosing 20 pictures out of a set of 1500 was a tiresome task. The good news is, I came back with something worthwhile. The bad news: So many shots and themes that I labored over had to be discarded for this reason or that.

There are many beautiful birds in Charleston. Herons, egrets, grebes, and varieties galore. My bird shots ended up looking very text-booky, and not artistic enough for inclusion in this show. That was disappointing.

Regarding man-made surfaces, I wanted to document the stucco and its deterioration throughout the city. Revealed bricks speak of the history and have an artistic decay as well. Again, nothing shot was usable for the weight of the theme I envisioned. I either didn’t have the focus or the right light, or the optimal framing.

None of my cannon or howitzer shots had the right magnitude. The battery parks, relics and scenes deserved better than what I came back with.

None of my cobblestone street pictures were quite strong enough. One picture nearly made it but was pulled in the final edit. The story’s the same: I think the subject deserves better coverage, and should not be a token throw-in.

None of my King Street pictures made the cut. Not because King Street is uninteresting, quite the opposite. To be frank, I was tired, “shot” as they say, at the time I hit this wonderful neighborhood. The 90+ degree wet heat and the late-day session doomed my work. Not that I didn’t try; I have enough good photos but no great photographs. The one plus was snagging the Powder Magazine shot on the walk off King. I saw what I wanted and this exhausted photographer nailed that old piece of wood. That single photograph, taken through a fence opening, was worth the unproductive afternoon on King.

I took two cameras with me on the trip. I am very confident with my “White Queen” Sony NEX-5N. We’ve created good work in three years. For this trip, I’d just begun to feel competent with my new A7R and its hot CZ lens. 36 megapixels provides such a range of hue and tonal value, I had to take her as my primary camera. We were ready to work together and I was very happy with the A7R.

In the end, all the photographs chosen for this exhibit came from the Sony A7R camera. For the first time I shot in combined RAW + jpg formats, to get the cleanest output possible. Five of the twenty photographs were processed as RAWs in Adobe Lightroom, and I’d have done more but the Sony jpg engine was so damned powerful and that good, out of camera. If you want to see the potential of RAW, take a look at the palmetto tree at dusk photograph. It’s a heavy crop but those palm edges were beyond my on-scene expectations.

For over thirty years, I have enjoyed drawing beautiful shapes and writing complementary stories. The imagery tends to focus on our place in the world—whomever or whatever we may be. I am influenced by Twentieth Century history—I read vintage magazines, books and letters. Inspiration comes from visualizing human achievement and personal interaction—derived from people, places and things which may be obscure, but never insignificant. My pen-and-ink THE MAGNIFICENT RECOVERY was selected by the Museum of Fine Arts, Boston for their 2008 summer art auction.
View all posts by Ara Hagopian's The LITERATE Show →
This entry was posted in 72 Hours, Photography and tagged American resort town, Charleston, civil war, Sony A7R, South Carolina. Bookmark the permalink.