Posted on November 4, 2014 by Ara Hagopian's The LITERATE Show

*Bookmark this page as I will be updating this article with new photographs and specifics on each shot.*

UPDATE SUMMER 2015: The first book in the Literate War series is out now. THE FIERY WINDS is the story of a WWII army captain, who is investigated after a man under his command is killed gathering enemy souvenirs. The book’s landing page is here: http://www.FieryWindsTheBook.com.

As I plan my next large-scale writing project, I’m tasked to create a series of war photographs that will have a direct tie-in to human interest stories. The images will be harsh and the writing will wield a different kind of weapon. The photographs must be original, interesting, and convincing. With The Literate Show, which is the banner under which I publish, the imagery has an equal responsibility to the story, along with the writing.

The Literate War photographs have to move us beyond tanks, soldiers and battlefields, with a mood conveyed with as little viewer effort as possible.

To create the visual component to the stories—stories that happen to be set in the Second World War—I’ve constructed basic sets with model tanks, buildings, figures, animals, and scenery. The sets must be lit and photographed—and the photographs processed—to optimize the story, and nothing else. The story drives the image, period.

A Soviet tank advances through fire, to ram the German invaders.

Drama can be created by manipulating light, at the time of photography.

A tank crew in the Libyan desert skirts Rommel’s forces and is trailed–just out of sight–by a scout car of unknown intention.

The diorama sets are made of custom-made set pieces–including fabric draped over a table–with added scale sand, rocks and brush. Photographs are shot with either a Sony NEX-5N or A7R mirrorless camera with the Carl Zeiss FE55 /1.8, often set to posterization mode, which wipes away the small-scale effect of the two-inch model tanks. Posterization negates the reflection of light and contributes to the illusion of a bigger scale.

The camera is mounted to a tripod and set to a ten-second timer, Aperture Priority, with a high f stop at around 11+. Flashlights and folded newspapers are used to shape the light and shadow. For posterization shots, the photograph is typically processed to sepia tone, with final details corrected in post-production.

PHOTOGRAPHY AS PERFORMANCE ART. Shooting pictures with the camera’s posterization mode is the alternate universe of photography. Light is exaggerated, the images are garish and distorted, and any alteration  or play of light will change the image dramatically. By observing the viewfinder, one can compose a posterized photograph with the ten-second timer, a tripod, a shooting set, and flashlights. For the Belgian village scene below, five flashlights were used to light the set. Two of the lights were handheld, which makes staging the picture somewhat of a performance. This photograph is a composition of over one hundred elements from several photographs shot in a three-day shoot.

A woman alone in a Belgian cottage must deal with her deceased husband’s pre-war political secret, as the War stops outside her home in December 1944.

BELOW: Cromwell fires in courtyard. 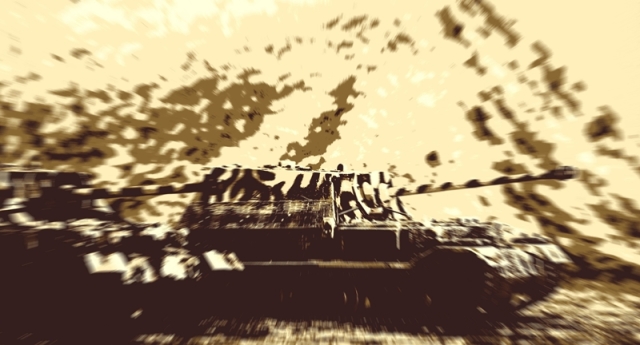 Elefants on the steppe.

Hanomag in the shop.

BELOW: Scale models and different techniques in front of the camera, within the camera, and in post production makes for an extended illusion.

BELOW: Diorama set design is where the story begins. At the other end, the visual piece is complete when we process the photograph.

There’s no peeking in battle.

BELOW: The set provides atmosphere, the model injects drama, and the camera carries it to you.

BELOW: Composition takes advantage of the subject’s design and alignment, as well as animation and color.

Muzzle flash as a dance.

BELOW: The desert rock wall is breached by the Allies. Photographed with fabric, sand, and stones.

BELOW: A few different technologies went into making this photograph. I used two colored pencils and Q-Tips for the dark on yellow squiggles, two mini-flashlights, Photoshop cloning, flare rendering, texture, as well as dodging and burning. Shot in high contrast black and white.

Sturmmosser Tiger contemplates the stigma of the tank in the proverbial social prison of public opinion. Or so says one photograph.

BELOW: A Soviet anti-tank rifleman peeks through the bushes at the German invaders.

BELOW: Armor and men cross a Belgian bridge during the Battle of the Bulge, December 1944.

StuG III and a soldier cross a Belgian bridge.

BELOW: The Cold War. 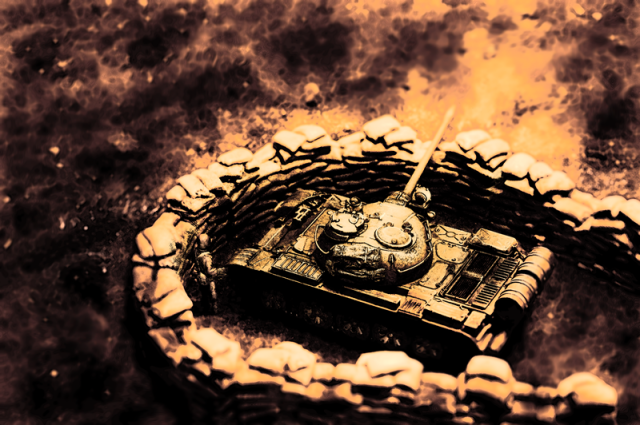 BELOW: From this shall spring a better world. This week I was tasked to create an illustration showing the worst of a situation, where (in this case) a locale has reached its worst point. Of course with The Literate Show the theme must translate to people, so the picture indicates the moment when we’ve hit rock bottom, and now what’s next? We stabilize. We’re going to gather our tribe and create a plan. And so we (that’s you and I) are going to have to start to clear some rubble, lift old bricks, and carry away the broken pieces of someone else’s dreams. Or maybe those were our old plans, destroyed by negligence or by someone else, or by us. Our actions now are to make way for what is to come. We’ve done this before, on a different scale but we’ve cleared and reset—and we’ll probably do it a few times in our span. There are two things I know: No matter how small, your tribe is your life, and it will get better from here.

From this shall spring a better world.

ABOUT— Ara Hagopian’s second book THE FIERY WINDS is out now: http://www.TheFieryWinds.com

For over thirty years, I have enjoyed drawing beautiful shapes and writing complementary stories. The imagery tends to focus on our place in the world—whomever or whatever we may be. I am influenced by Twentieth Century history—I read vintage magazines, books and letters. Inspiration comes from visualizing human achievement and personal interaction—derived from people, places and things which may be obscure, but never insignificant. My pen-and-ink THE MAGNIFICENT RECOVERY was selected by the Museum of Fine Arts, Boston for their 2008 summer art auction.
View all posts by Ara Hagopian's The LITERATE Show →
This entry was posted in Fiction, Photography, WWII and tagged British Lee tank, churchill tank, literate war, posterization, sony mirroress camera, t-34 tank, tank models. Bookmark the permalink.